A few more jacaranda shots have been posted on my photo site, just for the record.
Posted by Doug at 10:29 PM No comments:

A jacaranda-related post has been put on the original Dougressions site. In case you're interested.
Posted by Doug at 10:19 PM No comments:

One of the memories of my youth is my grandparents house in Long Beach, California. I remember my grandmother explaining to me that some of the trees that lined the street on which they lived, ones that bloomed with lavender-hued flowers, were called jacaranda. (You can read more about that them from the linked article.) 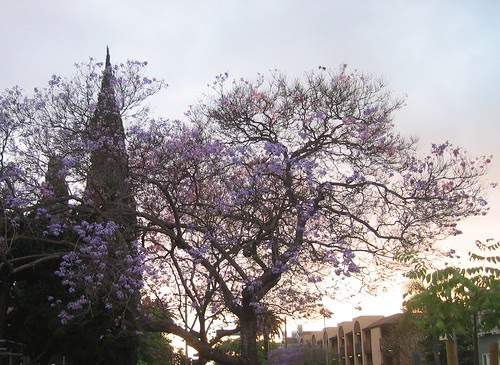 A jacaranda in bloom across the street from where I live in Long Beach.
Perhaps because of the association with my beloved grandmother, that information stuck with me stronger than virtually anything else regarding botany I have ever been told. (Not that I've been told that much, all things considered, but this was many, many years ago that I was told this, so it's somewhat remarkable how it has stuck with me.)

(I won't digress to pondering why certain information sticks in the brain, much to the shock of my regular readers.)

A few weeks ago I got inspired by seeing the myriad jacaranda around the greater L.A. area in bloom to start photographing them, to document how prevalent they are around here, despite not be native to this region (having been imported by horticulturalist Kate Sessions in the 19th century, it says). I recently learned that, technically, the ones here in Southern California are blue jacaranda, despite the flowers looking more purple--perhaps it's the same naming reluctance that makes purple grapes be called red grapes.

The trees started blooming in May, and by this point in June the bell-shaped flowers are dropping, so it really would have been better to have started a couple months ago, but hey, as I haven't mastered time travel, we'll have to make due, won't we?

I fully admit that once the flowers have disappeared, I'll eventually forget that the trees in question are jacaranda. That is, until next spring, when they'll return and my pleasant memory will be renewed.

And now, presented for your perusal, because I can, is the first in a series that will continue until I decide to stop. 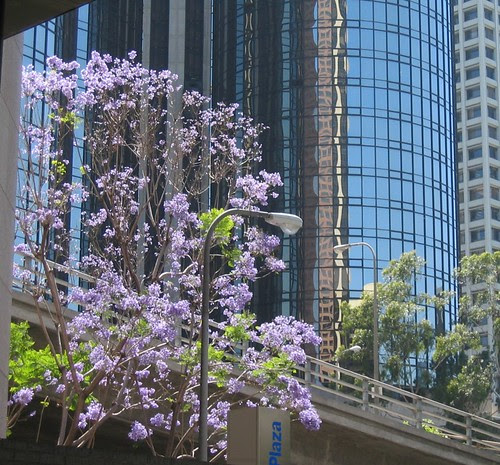 Next, a jacaranda by the office in Downtown Los Angeles
(yes, that's the Bonaventure Hotel in the background).
[As always, click on the pictures for a clearer shot, then click Back to return]
Posted by Doug at 2:38 PM No comments:

Continuing this inexplicable crusade to show you mediocre photos I've taken of jacaranda trees around Southern California. Today: a triple shot of shots from downtown L.A.

Enjoy. It won't hurt. Much. 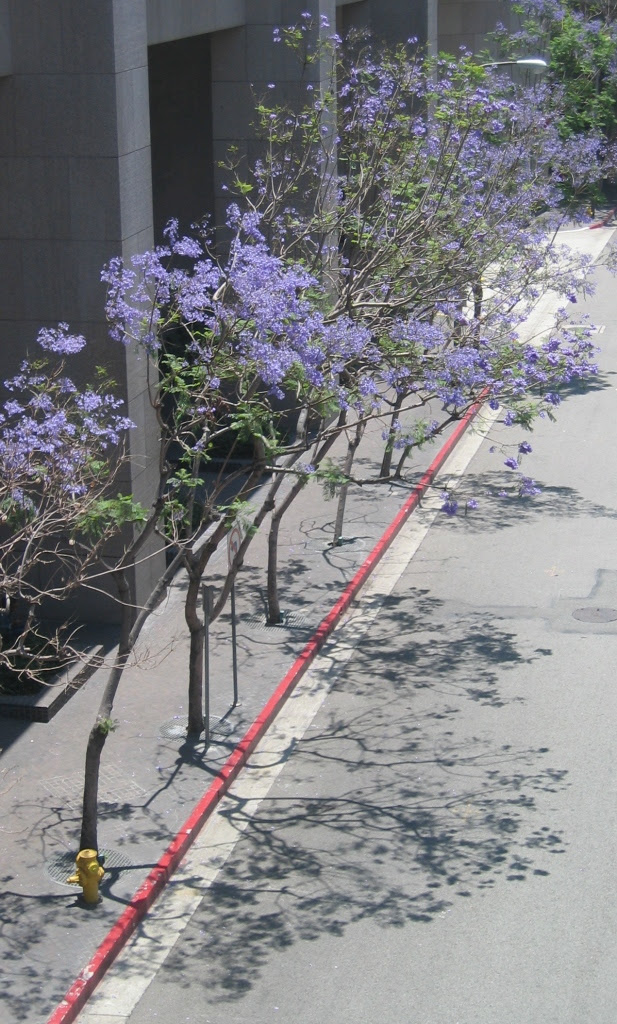 Row of jacaranda along Flower St. casting shadows in the midday sun. 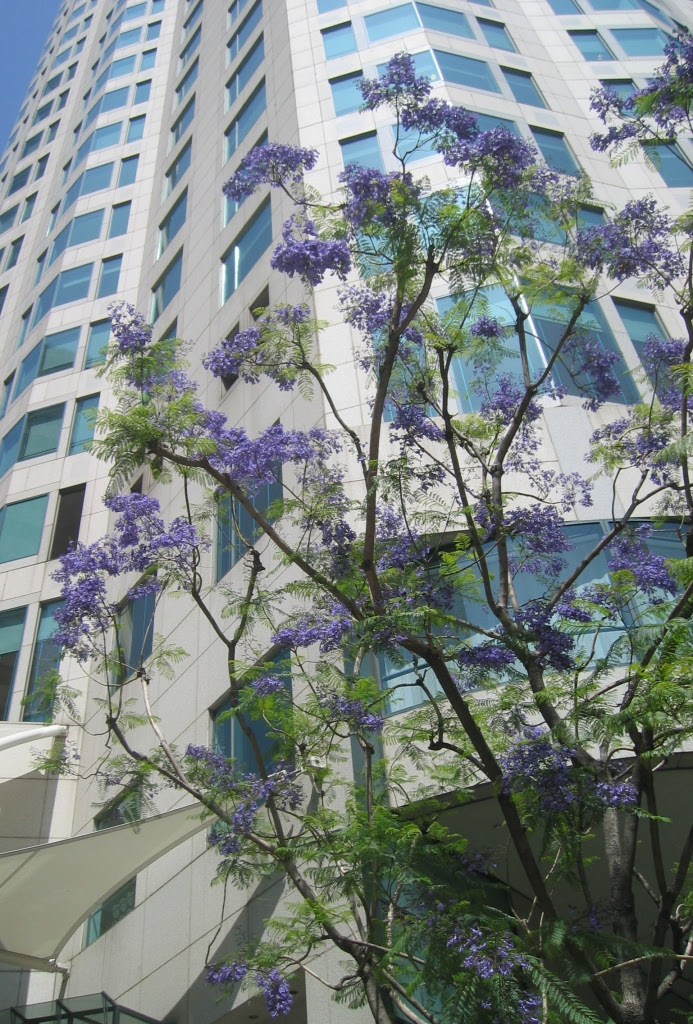 The lavender blossoms adorn the base of the tallest structure
on the west coast, the US Bank Tower (aka The Library Tower). 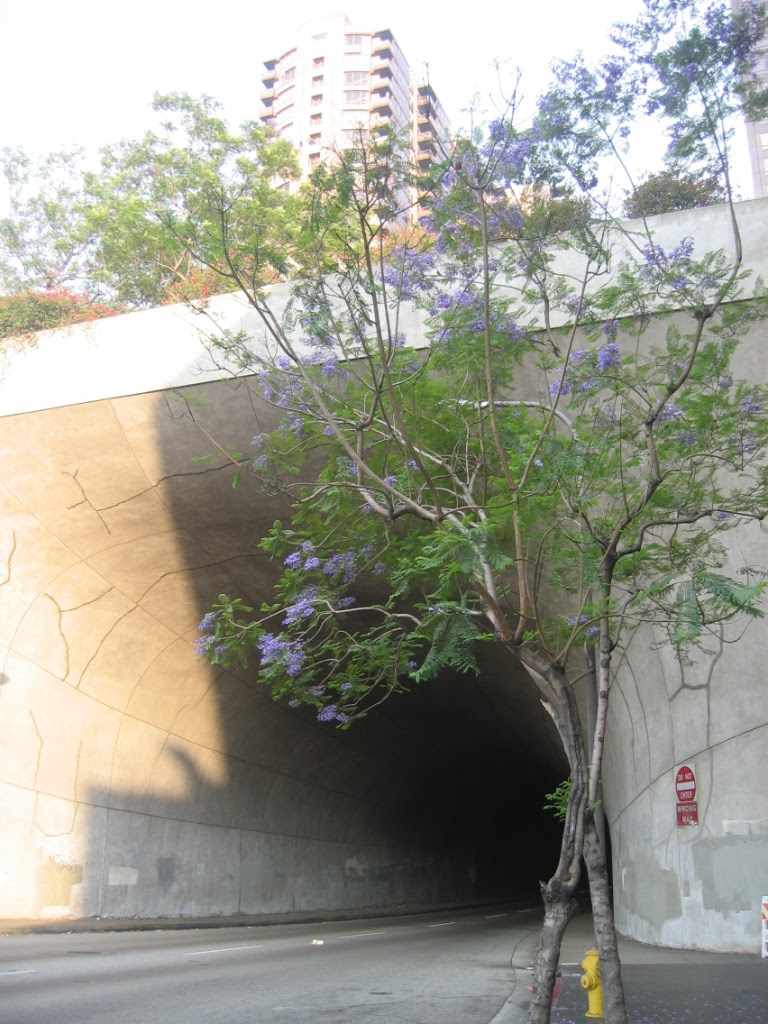 What's the first thing motorists see when emerging from the 3rd St. tunnel?
That's right: a jacaranda.
(If you look closely, you'll see one above the top of the tunnel as well.)
Posted by Doug at 2:37 PM No comments:

If you've just come across this, go read Monday's part 1 to understand what's happening. (To the extent that anything I do here can be understood.) And you may as well review yesterday's part 2, just so you can say you did.

It's better to regret what you did than what you did not. And with that in mind, here's three more pictures of jacaranda trees that you can regret looking at later. 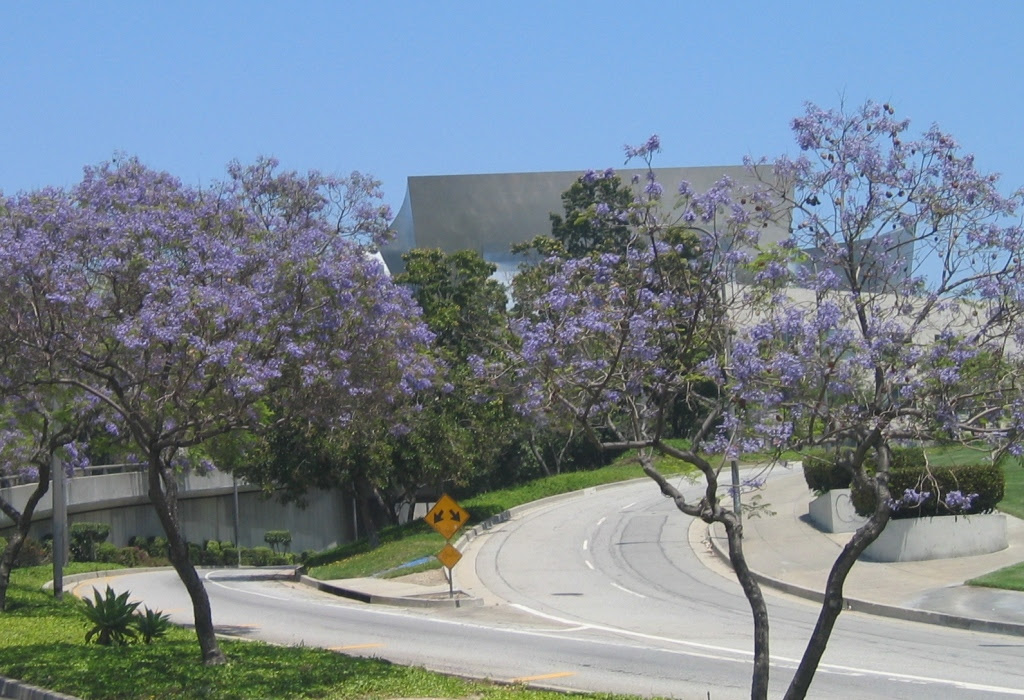 Just down the road from the Disney Music Concert Hall, they line the median.
(Remember: the focus in supposed to be the trees...) 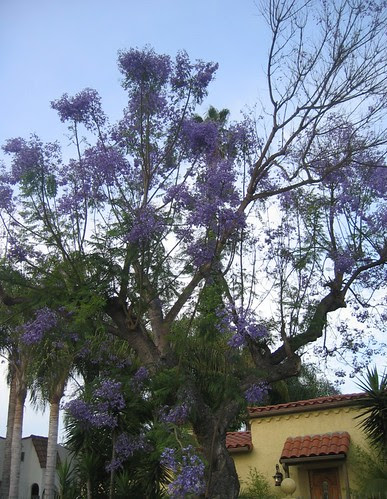 In front of a Spanish-style home in West Hollywood,
purple is the only color of the rainbow this tree needs.
(Go ahead and just leave your hate mail in the comments...) 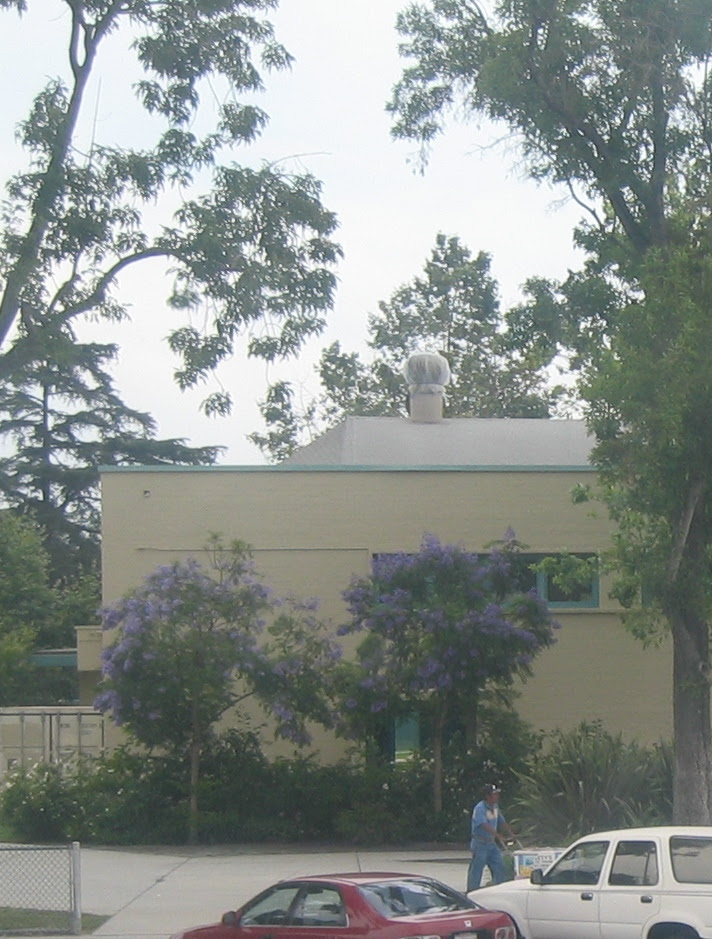 In the city of Walnut Park (adjacent to South Gate and Watts), one would expect Roosevelt Park to have... walnut trees (do walnuts grow on trees?), but amidst all the taller foliage there's some jacaranda as well.
[This was taken from a moving train. They're not all going to have swanky composition or great lighting, folks.]
[Can you click on the pictures to get a bit clearer images?
You'll just have to try it and see. Then click Back, if you want.]
Posted by Doug at 2:36 PM No comments:

When I started this craziness with the pictures of jacaranda, I alluded to my grandparent's house, citing the trees along their street. Later it occurred to me that, given I still live in the same town as where their former house is, I should go try to get some pictures of trees from that street, so I did that.

Never let it be said I don't go the extra mile (or approximately eight miles) for you people. 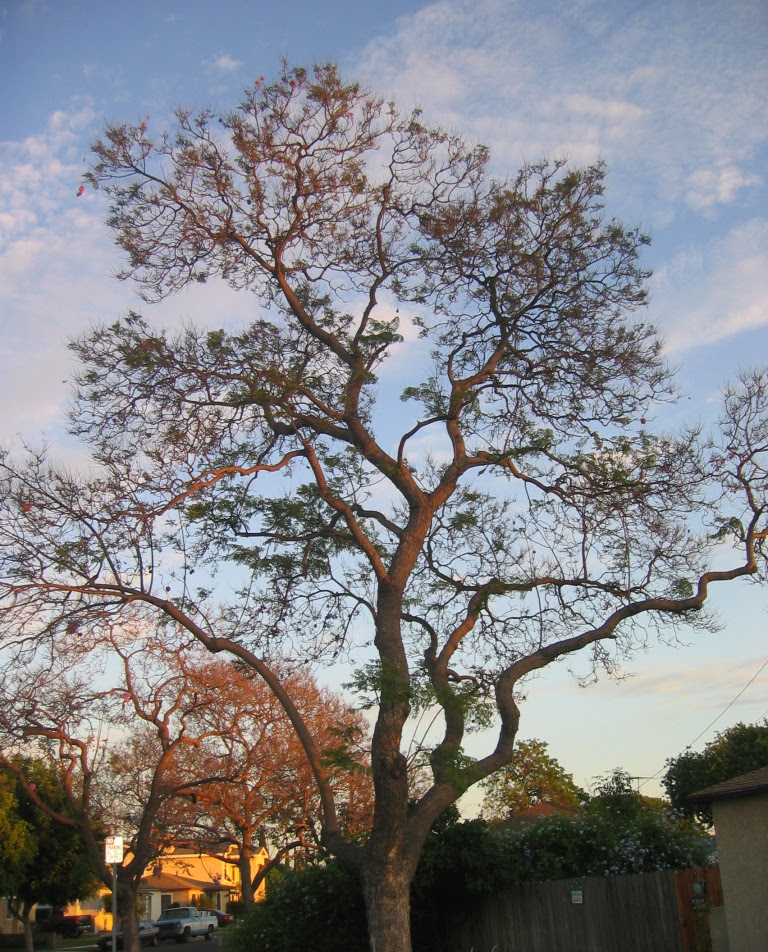 This tree is in front of the house next door to where my grandparents lived. 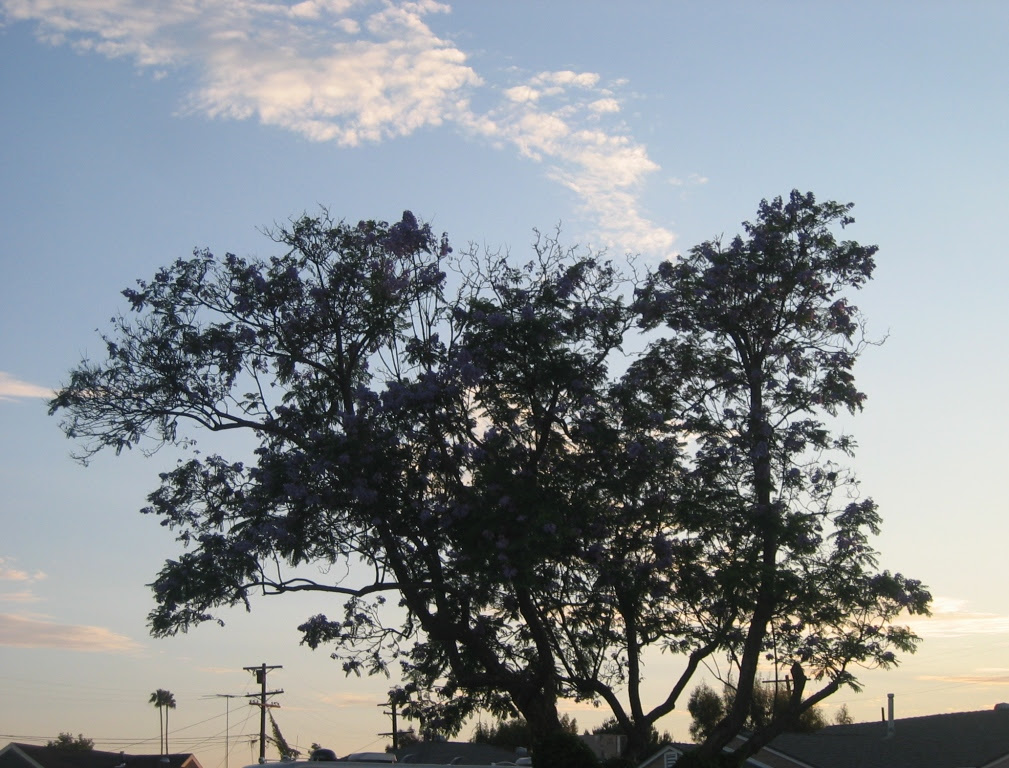 While there isn't a tree in the yard of (what was) my grandparents' house, this one is right across the street.
Posted by Doug at 2:35 PM No comments:

Proving I'll ride this horse into the ground and then just keep digging, here's three more jacaranda pictures I took. 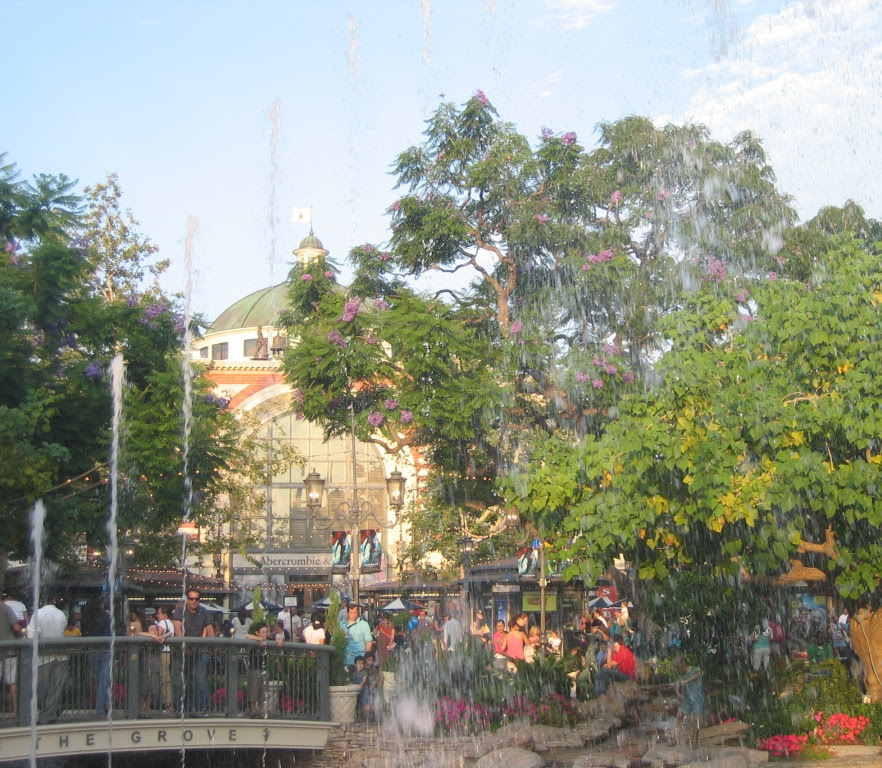 Behind the spritely fountain at the upscale shopping center The Grove (see the bottom of the bridge in the lower left) there's some tall jacaranda. (They come in all sizes.) 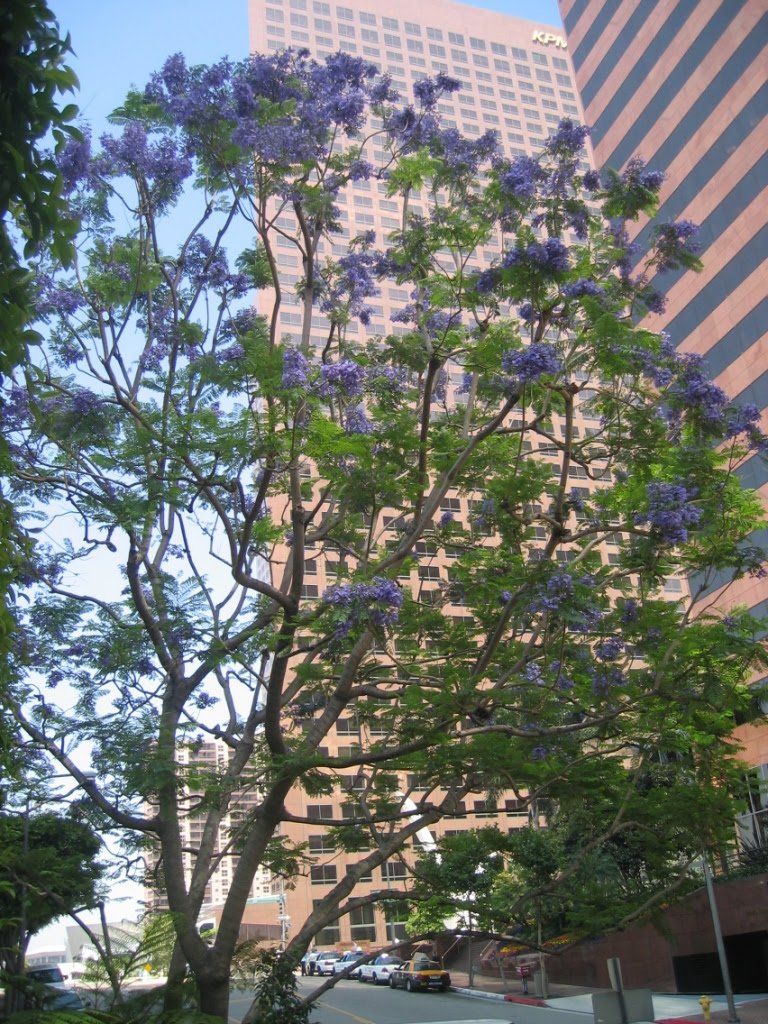 You're probably wondering: Aren't there any shots where the trees in shadow but the background is in light? Yes. Here's one along Hope St. in downtown L.A. 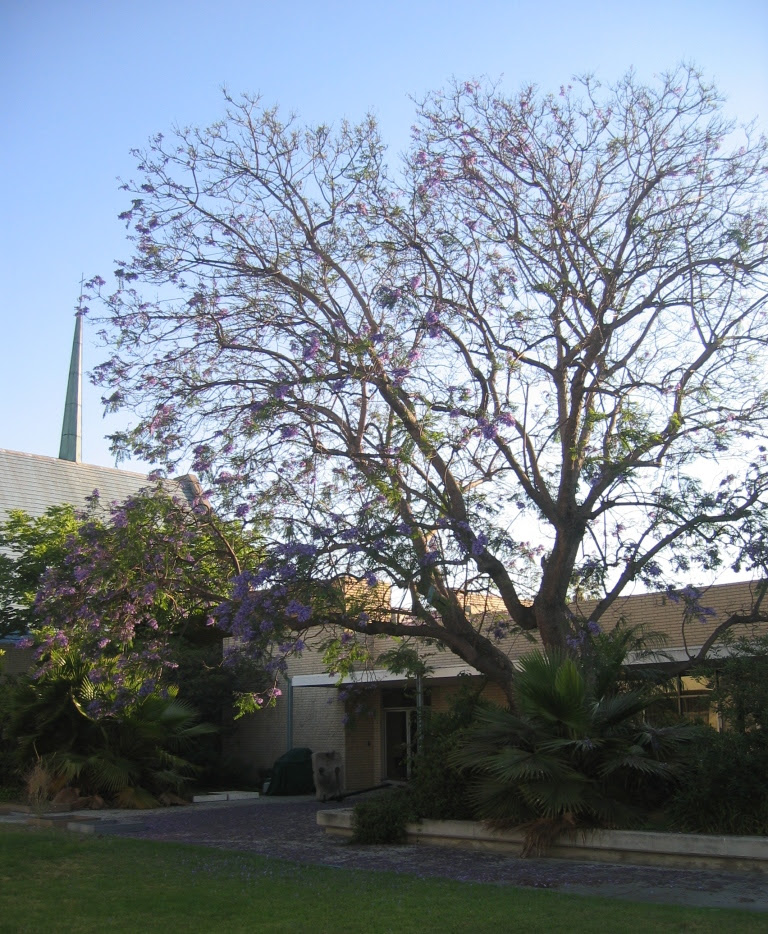 In the courtyard of a Long Beach Methodist church (the spire is in the background), this jacaranda tries to get a little closer to... the deity of your choice (or the lack thereof).
[Click on the pictures if you like. Or don't. Whatever.]
Posted by Doug at 2:34 PM No comments:

Another round of downtown L.A. shots featuring our new photographic obsession: the jacaranda around Southern California. 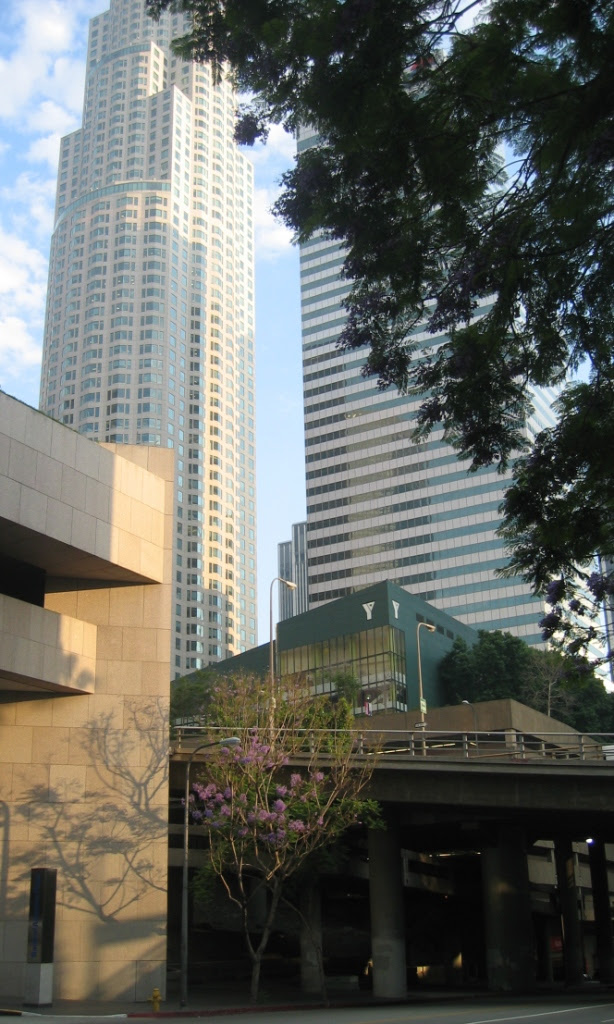 Undaunted by the towering buildings and oppressive bridges, a tree grows (not in Brooklyn) along Flower Street. (Actually, several do; the silhouetted branches in the foreground are also a jacaranda.) 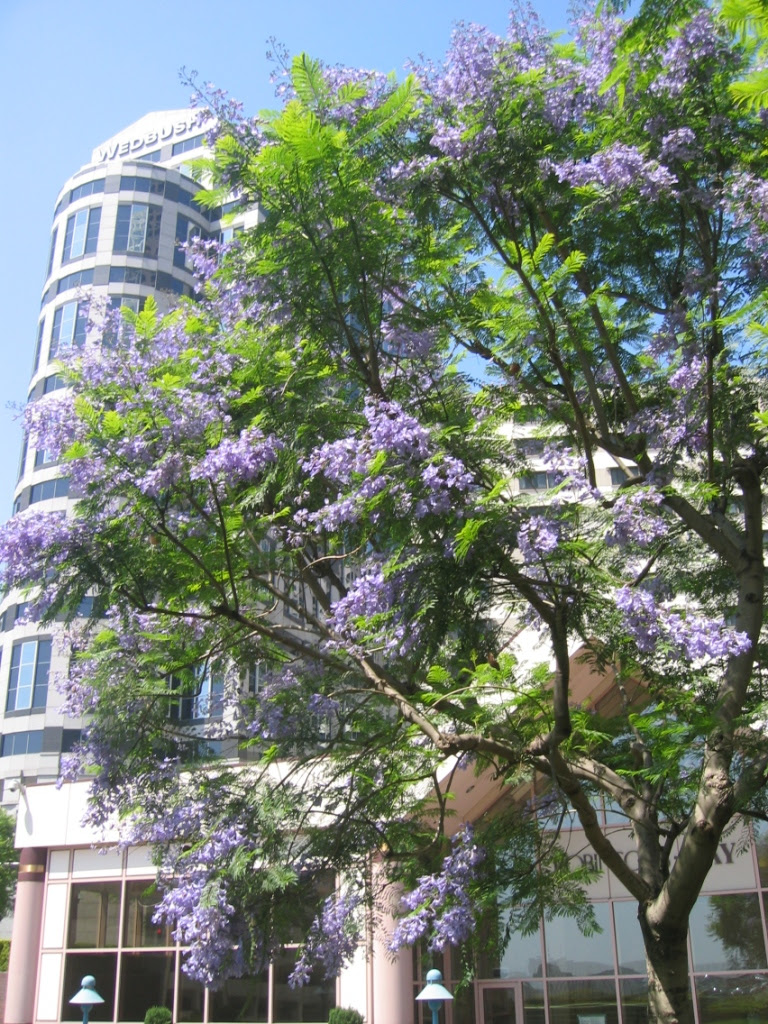 Around the periphery of the 7th & Fig shopping center, the jacaranda give shade to the crowds. 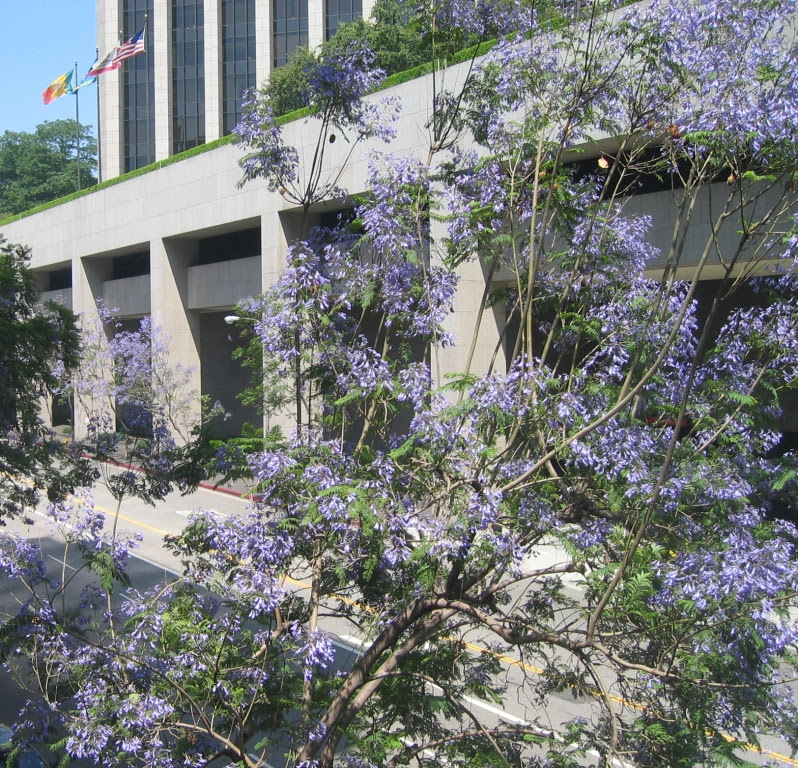 Outside the World Trade Center--the one in L.A.--are more of our favorite purple blossoms, and in the background flags wave on the grounds of the Bank of America building (above more jacaranda lining that side of the street).
Posted by Doug at 2:33 PM No comments:

Pulling the jacaranda photographing project (see the last week and a half's postings if you haven't already) into the topical (yesterday's festivities), we begin today's pictures with one including fireworks. 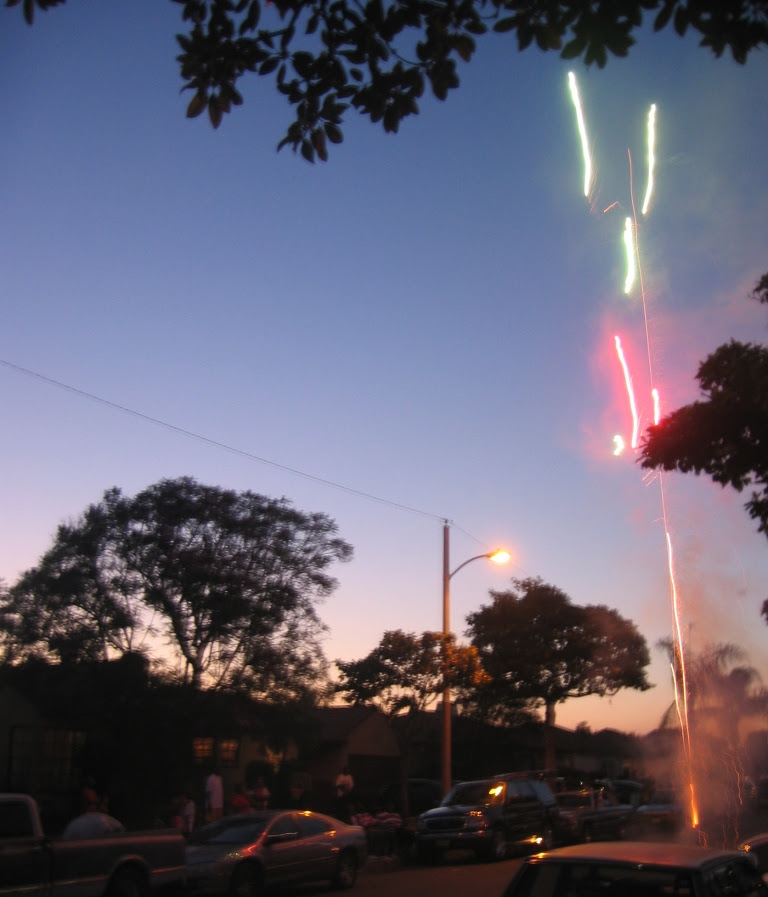 You're thinking, Cool fireworks, but where's the jacaranda? It's the silhouetted tree at the right edge of the shot, at a block party in Inglewood. 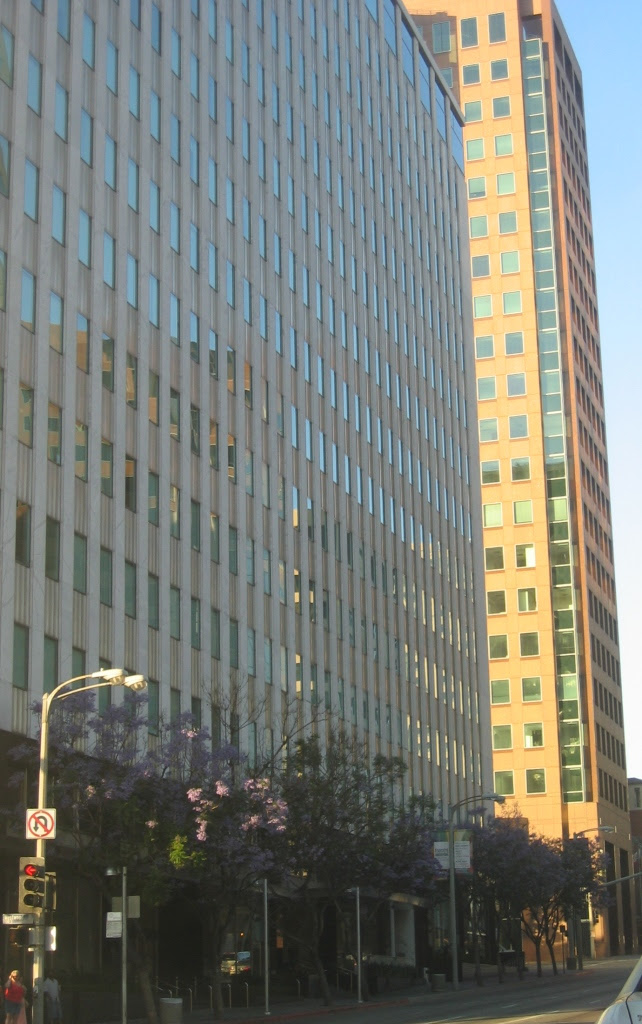 Lining Santa Monica Boulevard in front of these buildings in Westwood, it's... well, you know.
[Go ahead. Click on the images. You know you want to.]
(That's right! A complete posting of jacaranda shots where none were taken in Long Beach or downtown L.A.! I do get around.)

More pictures I've taken around Southern California of the sub-tropical tree known by its genus, the jacaranda. (Click on them. Do it.) 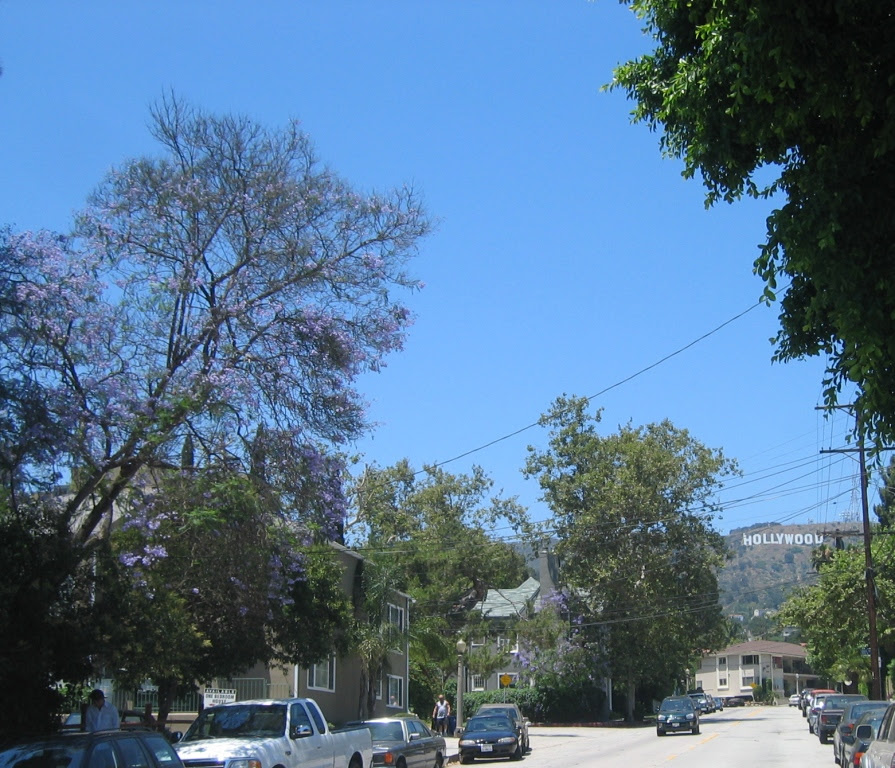 In the neighborhoods at the base of the Hollywood hills
(notice a certain landmark in the background) I risked life and limb
to stand in the street to get this shot (notice also the oncoming car). 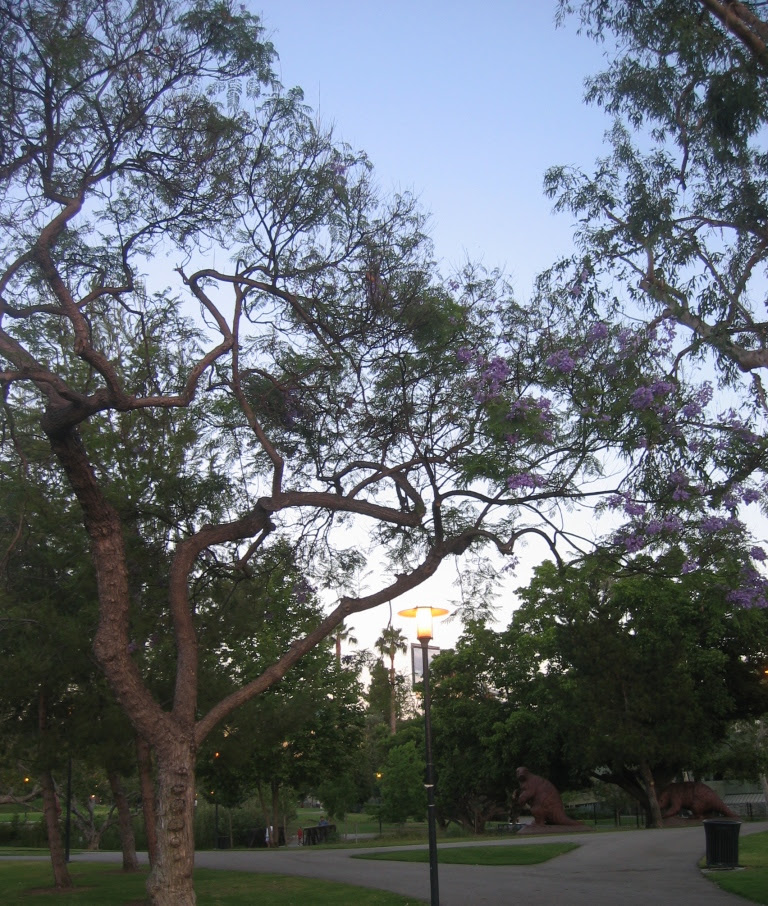 The north side of the park around the (somewhat redundantly named)
La Brea Tar Pits has a number of jacaranda planted there.
(Notice the statues of sloths in the background, lower right.) 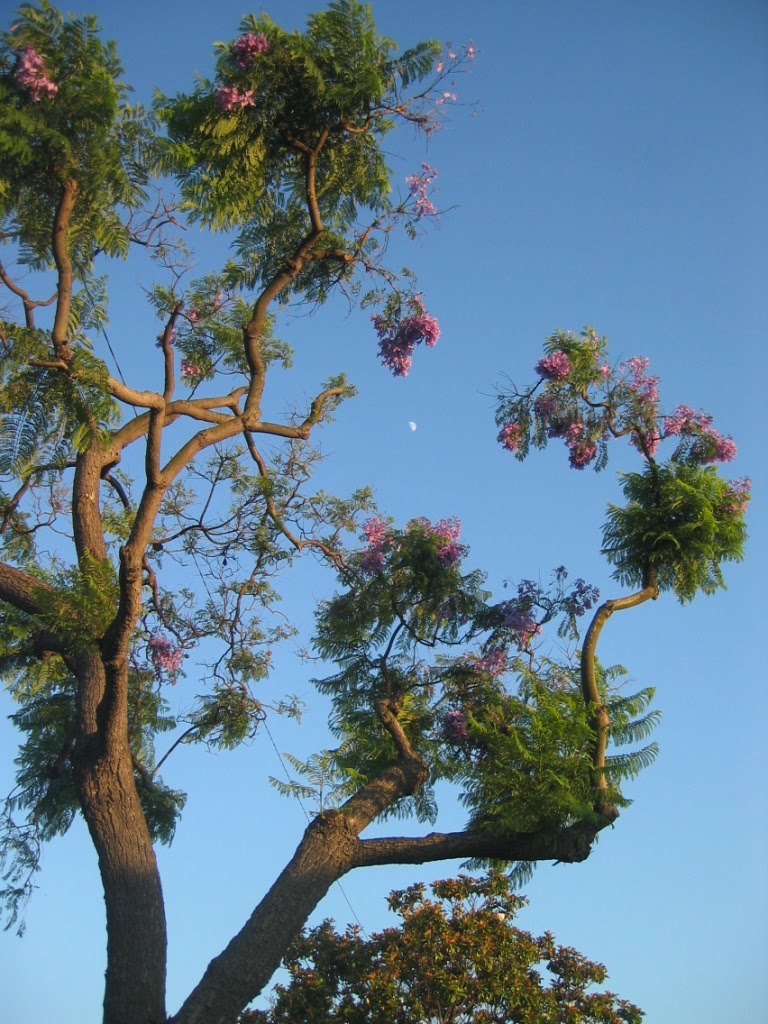 A close-up shot of the purple flowers, this time on a tree in Inglewood.
Yes, that white speck near the center is the moon.
(One day I'll get a camera with a more powerful lens.)
Posted by Doug at 2:31 PM No comments:

And now, the end is near, and so we face the final pictures...
Yes, I think we've had enough of this "project" (and it's getting more difficult to find jacaranda still blooming by this time of year), so we'll close off the third trilogy of posts with the last photos of these trees. 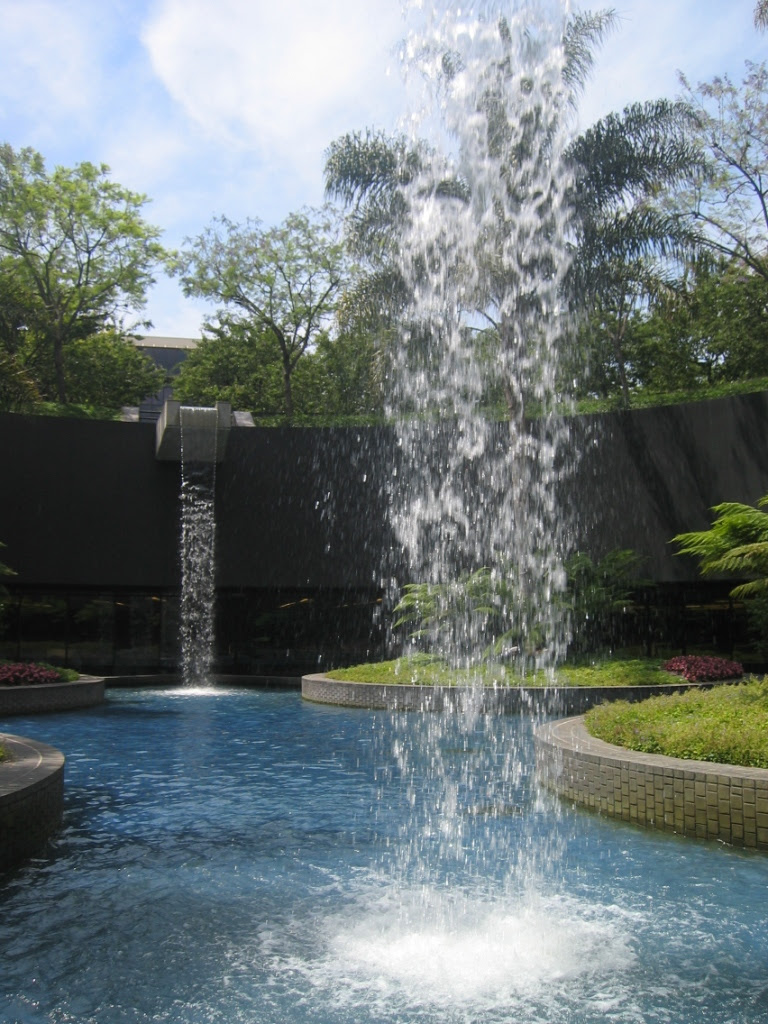 The below-ground courtyard of 333 South Hope St. in Downtown Los Angeles not only has waterfalls but is ringed by jacaranda. (Yes, both trees on either side of the waterfall in the background are jacaranda, as is the partial one in the upper right. Go ahead and click for a larger view to see the flowers.) 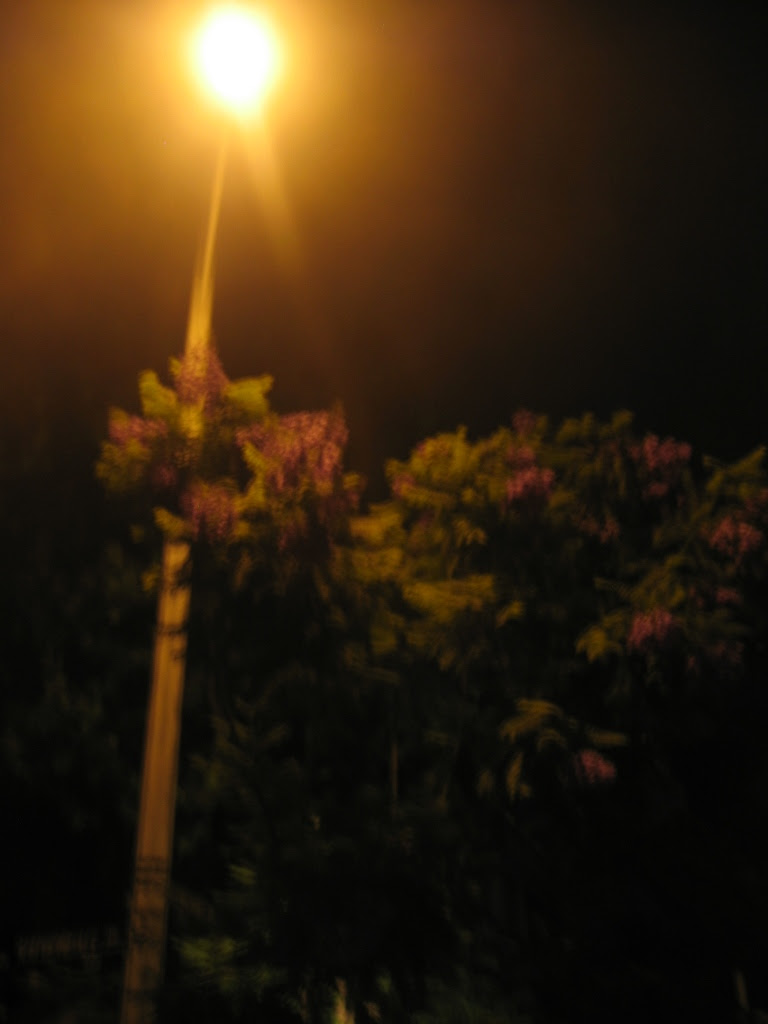 Up to this point, you've probably been thinking, These shots of jacaranda during the day, at sunset, and even at dusk, they're all good and well, but don't you have any taken at night, illuminated by a street light, slightly out of focus?
As a matter of fact, I do. This one I found in South Pasadena. 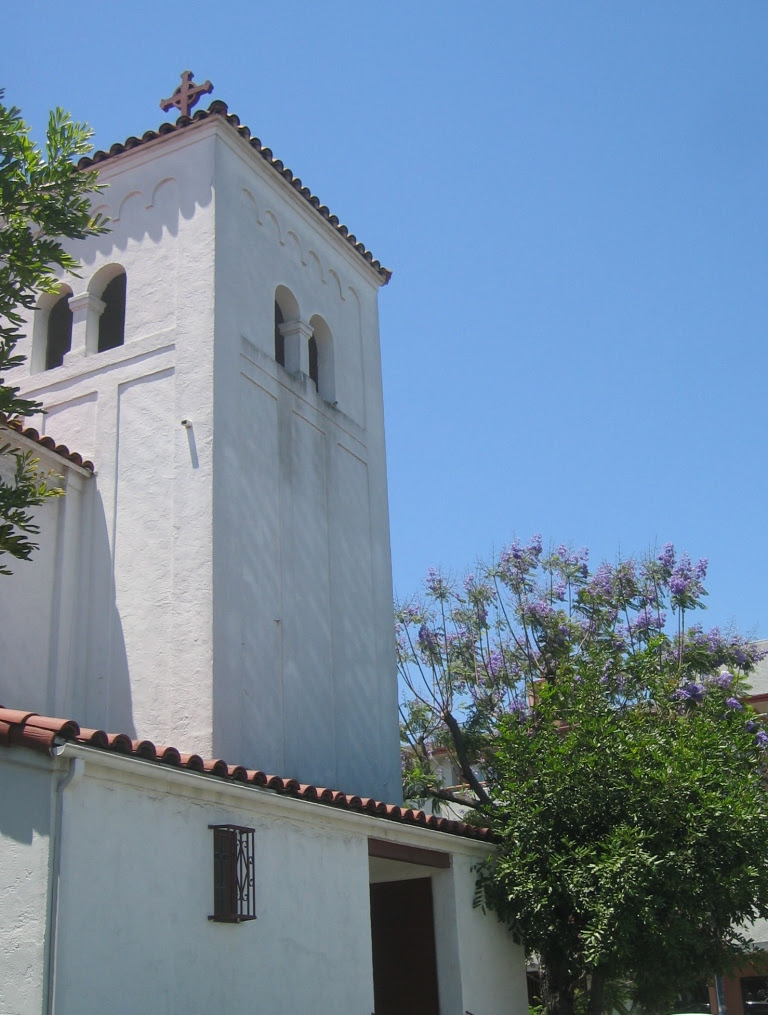 Jacaranda appeal to all denominations. 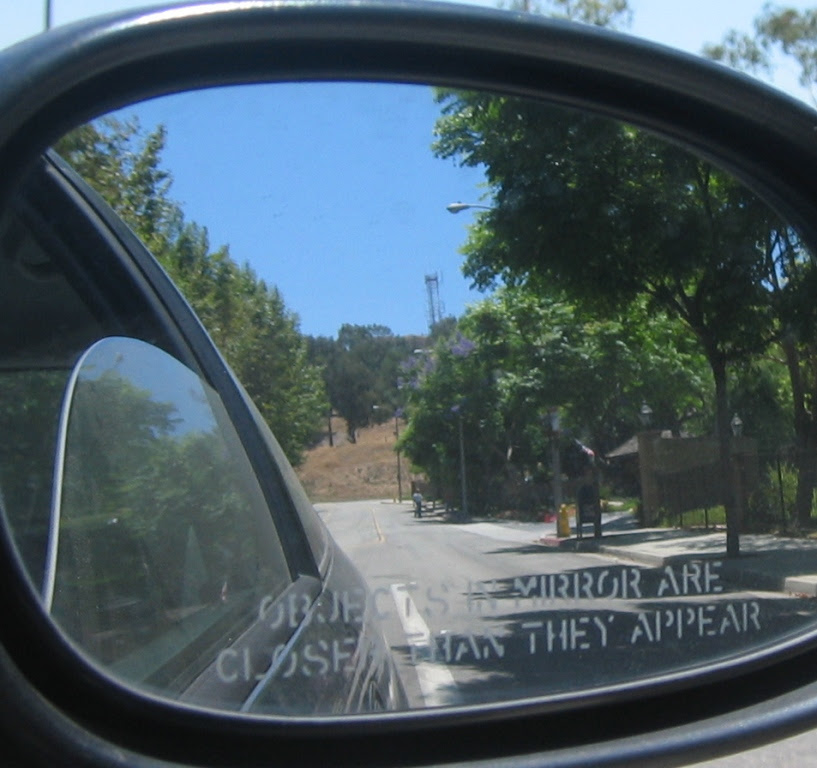 And a bonus "look back" shot to conclude our adventure. (Yes, that's a jacaranda behind the postbox.)
That's all, folks. (You're going to miss those puns. Admit it.)
Posted by Doug at 2:30 PM 1 comment:

Other sites by Doug